Chapter 3: Miracle in the Caribbean

Though Elayne encouraged my scuba diving hobby and would sometimes put on a mask and snorkel and paddle about on the surface, she had no interest in the underwater world.

But there’s a story here… 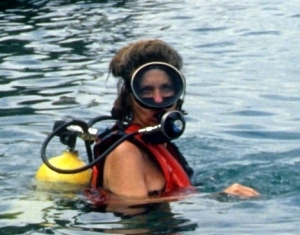 She can’t be serious.

We were on the island of St. Lucia in the Caribbean. I was returning to the dock with my buddies at the conclusion of our morning dive. As I stepped off the boat I noticed a group of three divers in waist deep water. To my great surprise my wife, Elayne was among them. They were beginners taking their first scuba lesson. I couldn’t believe it. There she was standing with a tank on her back with a regulator (breathing apparatus) in her mouth, preparing to go under.

As they disappeared I grabbed my own mask, snorkel and camera and followed. I found her at least 20 feet underwater surrounded by fish and other beautiful marine life. Proof of Elayne’s dive, which lasted a good half hour, is preserved on film.

When she emerged and returned to the beach I helped her out of her equipment, and we walked back to our cabana to get dressed for lunch. I said nothing; not even during lunch. It was while she was waiting to have her hair braided in cornrows…

Unable to hold it in any longer, and absolutely exploding with curiosity I said, “I don’t understand it… I need an explanation. We’ve traveled all over the world together in pursuit of my scuba hobby. You have had so many opportunities. World-class professionals like Valerie and Ron Taylor, to name just a few, have begged you to put on a tank and experience the wonders of the underwater world. Not once did you show any interest. So please explain to me. Here we are on some island in the Caribbean, I come back from my morning dive, see you suited up with a tank on your back, and then after all those years, without hesitation, you just slip underwater and spend the next half hour swimming with the ‘fishes’. There must be an explanation.”

There was a long pause, and then Elayne looked up at me and replied innocently; “It came with the room.”

We enjoyed several more opportunities to travel, and in my case dive, with Ed and Ann Janss over the years. The last I believe was on that visit to St. Lucia. It was no more than six months later, after a couple of heart attacks, or strokes, or both, that Ed’s doctor warned him that it was time to give up diving. Unfortunately Ed wasn’t the kind of man who dealt well with limitations. In March of 1989, sportsman, photographer and patron of the arts; Ed Janss took his last dive from a high rise in Santa Monica.

As for Geoff Nate… After a couple of just so-so dive trips and what with the ongoing devastation of the earth’s coral reef system, I sold my scuba gear, cameras and all, and took up fly fishing, another excuse to travel to beautiful new destinations. Elayne didn’t fish, but with the exception of my stag trip to Siberia, we continued to explore the world together, and on many occasions in the company of our children and later our grandchildren.

Ann Janss and Elayne and I remained good friends for many years. Today however, both ladies have joined Ed. Hopefully as I relate this tale the three of them are sailing together in search of some beautiful coral reef up there in paradise.

Redfish in the Carolinas

Though the experts can argue about the extent of global warming’s impact on our oceans and the air we breathe, no one can dispute the pollution caused by such human-contributed factors as oil spills, mining, industrial waste and agricultural runoff, which today includes herbicides, pesticides and chemical fertilizers. The undersea world has no protection against such pollutants.

Today, the oceans are littered with man-made debris, specifically plastics, which are said to take from 450-1000 years to decompose. There is supposed to be a virtual continent of plastic trash called the Great Pacific Garbage Patch which is estimated to be, at a minimum, the size of the state of Texas.

In the Caribbean where I fish from time to time even the smallest remotest little beaches are littered with man’s plastic discards.

As for the status of the earth’s coral population, scientists believe for example, that 50% of the Caribbean’s corals have already disappeared just since the 1960s.

Many thanks to those documentary film makers who have endeavored to preserve on film, for future generations, the beauty of the earth’s tropical underwater world. Our “Begged and Borrowed” segment includes an excerpt from a short video featuring some of the coral reefs’ tiny but beautiful little creatures and the roll they play in nature’s struggle to maintain the health of the reef and their fellow inhabitants.

2 thoughts on “Chapter 3: Miracle in the Caribbean”

If You Dare... Cancel reply